The American Mosque: An Overview 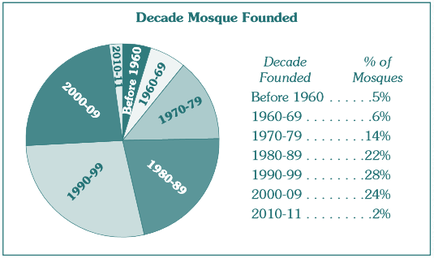 The 2011 American Mosque Study
The growth of mosques in America started in the 1970s and it has not abated. The 2011 American Mosque Study reveals that each decade since the 1970s has witnessed substantial growth. A remarkable 26% of all mosques were established from 2000. These figures also highlight the youth of mosques as an institution in America. Over three-fourths (76%) of all mosques were started since 1980.
The number of mosques and mosque participants in America continue to show significant growth. The nationwide survey counted a total of 2,106 mosques across the US, as compared to the year 2000 when 1,209 mosques were counted, representing a 74% increase from 2000.
California boasts 246 mosques-second only to New York at 257. For our purposes, the 2011 study counted approximately 62 mosques in the San Francisco Bay Area area.
This study claims that the building boom is indicative of the growing financial resources of the Muslim community as many Muslims have lived in the US for several decades now and their financial resources have improved.
For more information and photos on mosques across America visit the 30 Mosques blog.

Nationally, the mosque study revealed that the majority of mosques in the United States are still existing buildings converted to an Islamic prayer space. Approximately 30% of all mosques were built as mosques. But the number of newly built structures has doubled in the last decade, to 632 in 2011 from 314 in 2000.  The majority of buildings used as mosques (56%) were purchased versus rented. The purchased buildings range from former churches to storefronts to houses to commercial structures.
Through our Bay Area Muslim Communities project we will collect data on local  mosque structures as part of our overall project and include that in each location website bio and examine how our regional places of religious worship figure into the national average presented in the mosque study.
San Francisco has been ranked among the highest  regarding residential rents and non-profits in San Francisco are finding it difficult to keep their doors open as climbing rates make it difficult to purchase or rent building or office space. A recent blog project called 30 Days found innovative efforts at creating sacred space to act as mosques such as  rented parking spaces in a garage in Sausalito and recently San Francisco International Airport portioned a piece of a parking garage to act as a mosque for shuttle and taxi drivers.
Recently, mosque movements have emerged raising discussions on how to 'unmosque' or 'remosque' American mosques and keep them relevant. Beyond the mosque, 'mosque alternatives,' such as Taleef Collective in Fremont, California have sprouted and also a digital project entitled A Moveable Mosque,  where a young Muslim woman explains that the concept of a mosque is beyond four walls and a minaret and she appeals to Muslims to take photos of where they pray (or from where they stand) and post it with the hashtag #thisiswhereIpray.

For a close up look at mosques, Muslim TV: Mosques Edition presents the start of the video series highlighting the design, architecture and features of various American mosques through creative and fun video tours, much like MTV Cribs. The first video covers the The Islamic Association of Greater Hartford in CT. The future featured mosque visits can be found on the MTV Mosques Facebook page.
Our students participated in mosque visits across the Bay Area and have captured their visits via group websites linked below the video, complete with community maps and programs, structure information, interviews, photo galleries, videos and links to social media utilized by each mosque.